Re-informatization of the documentary establishments of the ESR: offer of support from theAbes

From 2021 onwards, within the framework of an annual grouping of orders, theAbes will accompany institutions wishing to renew their subsequent contracts concluded under the SGBm framework agreement.

Each year, a "lighter" grouping will be offered to institutions to enable them to negotiate collectively and secure the renewal of contracts.

For any question related to the monitoring or renewal of a contract: sgbm@abes.fr

A mechanism is also planned to support the computerisation projects of institutions that did not participate in the SGBm framework agreement.

In addition to this generic offer,Abes offers individualised support and coaching of 1 to 2 days spread over several sessions. This service is offered free of charge and requires prior contact with the team.

Initiated in 2010, the shared Library Management System (LMS) project was one of the actions of the2012-2015 establishment project of theAbes, considered as a priority by its Board of Directors and Scientific Council.

The framework agreement named "mLMS - Shared Library Management System" covers the provision of a document services platform linked to the systems managed byAbes. The set of solutions selected includes the classic functions of the SIGB, a link resolver, a discovery tool, access to a knowledge base and an ERMS.

Within the framework of this project,Abes was the contact for the BMS suppliers and the institutions for the exchange of bibliographic data , the production of metadata and theguarantee of their quality. For their part, the institutions were the suppliers' interlocutors as regards support and integration with local information systems. Other actors intervened at the request ofAbes or of an institution to implement adaptations or technical complements, in particular during integration with other systems.

Following a sustained competitive dialogue, which allowed the economic model, certain functionalities and the suppliers' project engineering to evolve, a framework agreement was finalised: this defined the technical requirements for all the signatories of the order group and committed the contract holders for a period of 4 years, particularly in terms of price ceilings.

As the holders of the contract were put out to tender again by each establishment in the grouping within the framework of subsequent contracts, this framework agreement guaranteed a good level of technological and economic competition between the solutions selected.

The holders of the framework agreement, who are the only ones authorised to equip the signatory establishments of the order grouping, were called upon to negotiate within the framework of subsequent contracts taking into account their specific needs. In order to increase their weight in the negotiations, some institutions chose to join forces and draw up the contract documents together. At the end of the procedure, each institution signed its own subsequent contract for a period of 5 years.

For the whole grouping, 2 annual deployment waves have been scheduled until 2020.

From a technological point of view, the software as a service (SaaS) model has been adopted: the service platforms offered by the providers are based in the cloud, and the institutions pay a global annual subscription. The storage of data in a mirror database has been provided for.

Particular attention has been paid to the interconnection between the BMMS and the information systems of each institution (human resources management, financial and accounting management, etc.).

Although focused on local systems, the mBMS project retains the objective of strong articulation with national systems, both current and future. Institutions equipped with mBMS solutions continue to catalogue and exemplify their resources in Sudoc. Particular attention is paid to certain more delicate areas:

New modes of cooperation with institutions

Within the framework of the SGBm project, a new mode of cooperation between the pilot institutions andAbes has been initiated, based on collaborative work in the interest of the institutions.

This cooperation with the institutions has been extended to 2020. Among the mechanisms for consultation with the pilot sites, the support and management of the subsequent contracts have proved their worth. To support these operations, some ofAbes 's services have evolved or are in the process of evolving:

Since 2015, anannual Information Day is organised for the members of the SGBm framework agreement. Since 2020, the topics covered have been expanded to include more general issues around GBS. Only the contents of the Professional Days scheduled since 2020 are open access, the contents issued before being subject to confidentiality. 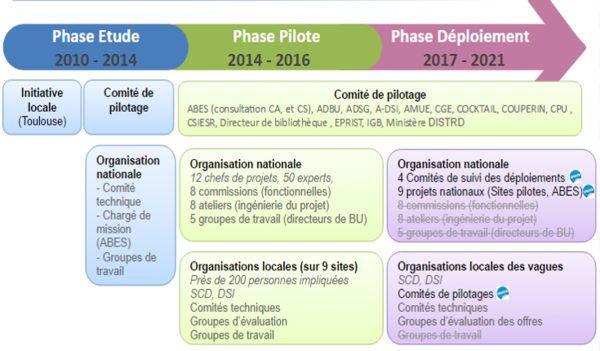 Following the publication of an impact study,Abes commissioned Pleiade Management and Consultancy to carry out an exploratory study of the scenarios envisaged :

Following the opinion of the Technical Committee, the Steering Committee and the Scientific Council ofAbes, the Board of Directors, at its meeting of 31 May 2013, opted for scenario 2, enhanced by an additional study. In terms of public procurement provisions, the competitive dialogue framework was chosen .

In July 2013, after the Technical Committee examined the conditions for participation in the pilot phase, 9 institutions (out of 46 applications) were selected as pilot sites.

Two working groups were then set up:

Governance of the mBMS project

Two committees have guided the project: